Reflections on things I saw along the 3-night, 4-day Three Capes Track. This was written on my phone, starting at Munroe cabin on the second night, and finished on the way home.

I’m sitting on a wooden bench on a verandah on what feels like the edge of the world. The jagged, towering coastline I’ll be walking tomorrow stretches off ahead of me. Behind me, the hut kitchen, and the sounds of handfuls of kids and their parents playing board games. The social side of the walk- being in a group of strangers at the huts at the start and end of each day- is a little tedious. I want to be in this wild and beautiful place with less company, and enjoy it quietly.

But out on the track I mostly am alone, and have a lot of time to look at things.

Just before I sat down to start writing this we saw a pair of sea eagles, recognisable by their huge size and white bellies, come swooping up the side of the cliff we’re perched on, then dive again, off and out of sight. Among the rocks between the verandah and the cliff edge I can see a tiny, brilliantly blue fairy wren hopping about, as adorable and perfectly round as one of the long-tailed tits we exclaim about in Sweden. Every now and then it spots its reflection in the window and flutters angrily up to attack the glass.

We stopped for lunch today at a spot called Jurassic Crack. It was a ledge of rock overlooking a towering, sheer cliff face formed from these startlingly straight columns of a dark rock called Jurassic dolerite. It was pouring rain but we sat for a long time, admiring the view, eating tuna on damp crackers, trying to get photos that would do the whole towering drama of it some justice.

Not long after that we crossed a huge wind-swept moorland covered in dense, low brush. I stopped periodically to listen to the birds, but it took ages before I managed to spot one. A tiny brown darting thing, which I think i’ve just identified as a ‘striated field wren’ from the field guide to Tasmanian birds that is present at each hut.

The bush smells warm and spicy from the rain that’s fallen and the sun that’s come out now. Eucalyptus and tea tree mostly. It was alright to be walking in the rain this morning, except when we were up on the windy, freezing peaks- then it was a little desperate. Down in the forest it was nice, cloudy and gentle after the glaring bright sun of yesterday’s walk from the beach to the first hut. 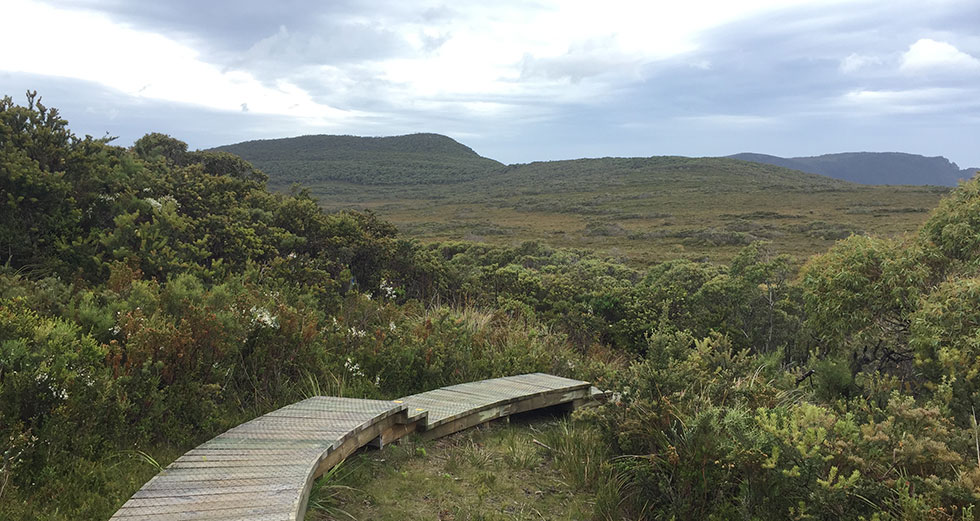 On the plane from Hobart to Sydney, starting to make my way back home now. The day after I wrote the first part, we walked out to that thin, tall spit of rock called The Blade. We woke up early to catch the sun rising above the thin band of cloud on the horizon. Wedge-tailed eagles (“look for the ‘fingers’ stretching out from the wings”, said the ranger the night before when we asked how to tell the wedge-tails from the sea eagles) soared the cliffs in the weak golden light. We were the first walkers out on the track.

Our early start might be the reason why, not far out of camp, we came across an echidna head down in a tree stump, scrabbling for ants right beside the track. It’s a lifetime dream to see one so close and so unbothered by us- neither moving away nor defensively curled, just digging calmly for ants with its spiky blonde bum in the air like we weren’t there at all. We watched it for a long time, and photographed it from all angles, before moving on.

The bush out across Cape Pillar towards The Blade was dense scrub that gave way to barer, windswept patches, and on the ocean side to a few wonderful sloping wetlands. We saw many snakes, under rocks and just lingering by the track. In the valleys the enormous black cockatoos screeched and soared, and at the edges of the cliffs swallows dived up and down at incredible speeds.

On top of the ridge right before the track descended towards The Blade, the winds were truly ferocious. We’d been warned of gale-force, with gusts of 200km an hour, and up there the gusts had a solid, physical shove. Walking over that unprotected ridge- no fences, no railings, just a 300m drop to the ocean- my heart pounded like I was rock climbing or diving or some other terrifying physical sport. I told my sisters and myself that if I got scared, I’d just sit down, to make it harder for the wind to knock me over.

But the wind didn’t knock me over, and it grew a little calmer as we walked out onto The Blade. It’s a really incredibly piece of rock, no more than a few meters wide, extending straight up and out of the ocean and growing both taller and narrower towards the end, until you’re scrambling up bare rock with the long drop to the violent ocean visible just to each side of where you’re carefully placing your feet. And yet despite its narrowness and the wind and that dizzying drop, it felt secure enough that I kept choosing to go on and up, seating myself firmly whenever the wind gusted, shuffling from step to step, til I got to the very top. There’s only a few dense, twisted shrubs clinging to the rock up there, and spotted skinks darting in and out of the cracks. I saw one of them snatch a fat fly out of the air right where I was about to put my boot down.

I felt like I took photos while I was up there- victory shots to try to capture that momentous grandeur somehow, and the spectacle of all that towering coastline in all directions- but I see now that I have only a few timid, quick shots of it. The truth is I was spooked by the wind and the height, and came quickly back down. The better photos are from the more secure ground back on the cape.

A little way down The Blade we came upon the first other hikers of the day, and gave them our wide-eyed and enthusiastic recommendation that they should try for a The Blade as long as the wind hadn’t picked up. Then we walked up and over the cape, back to the spectacular cliff top hut, and then with our full packs to a forest valley hut further along the trail.

Setting off on the last walk of the track, a wallaby eating grass right by then boardwalk spotted me and bounded off- further up the track, and resumed eating the grass. It looked outraged as I continued to walk up towards it, and bounded off again- about 20m up the track. We kept playing this game until the boardwalk gave way to gravel path, when it bounded off down some wallaby highway in the tall grass.

Beside the track every day we spotted wombat poo, although no wombats. Wombat poo is easy to spot because it’s oddly cubed, and they leave it over and over again in the same spot, preferring rocks and ledges. It’s like a gallery of poo of different vintages. 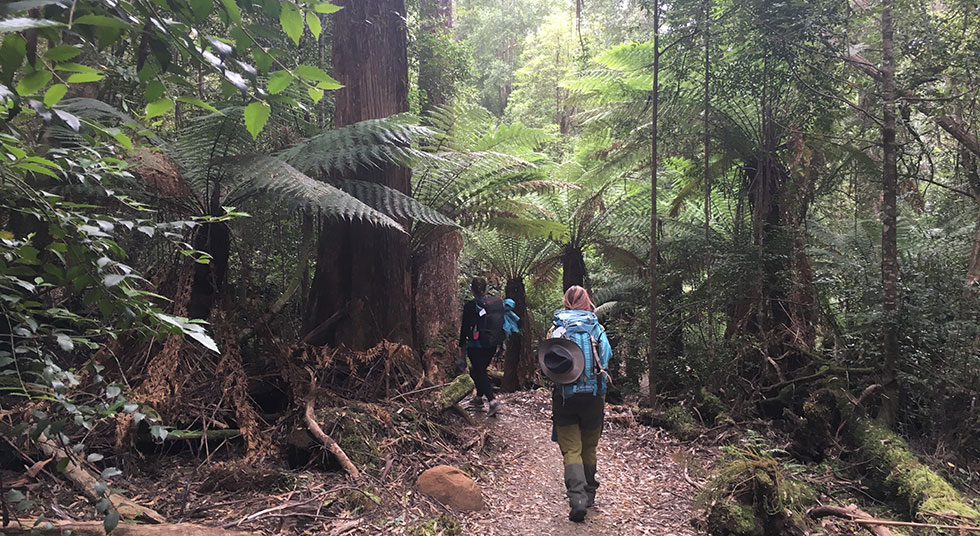 The rainforest we climbed through to the modest peak of Mount Fortescue was some of the eeriest stuff i’ve ever seen. Small hikers among enormous tree-ferns, bright fungi, few birds, lots of leeches. Then over the mountain and back to the coastal scrub down towards Cape Huay. That was a long walk with a lot of stairs, and increasing numbers of unfamiliar faces- day hikers, coming in from our planned end point at Fortescue Bay. They smelled from meters away like perfume and soap.

The walking track out to the point was a narrow cut through the dense scrub, and in places the swallows used it as a runway, rocketing through at head-and-shoulder height with fearless speed and then looping off overhead. More skinks out on the Cape, and loads of fairy wrens. We ate our last hiking lunch out there, and I toasted my birthday with sticky lemon cupcakes I’d carried for 40km in a takeaway container. They were still good.

By the end of the track the sun had come fully out, and despite the many warnings that it was impossibly cold, the shallow blue water of Fortescue Bay was looking inviting. I figured that after carrying my swimmers for 47km I should probably give it a go. We jumped in, and didn’t regret it. It was probably 16 degrees, and the prettiest body of water I think I’ve ever swum in. Unreal blue over white sand, and dark rocks at the edges to warm up on afterwards. Swimming in Sweden has taught me what’s so very good about that.

I’m finishing this in the departure lounge, Sydney->Bangkok. I’ve stepped into the bland nowhereness of long-haul flying, and will soon emerge from it into what the weather app tells me will be a grey and frozen Stockholm morning. I bring with me a mild sunburn, a few souvenirs, and a great joy to be homeward-bound.

Eating on the Three Capes Track