About six months after I started my current job, the first one I’ve had that involves regular contact with production servers and live databases, I spotted this great hint-disguised-as-a-cautionary-tale from @HonestStatusPage: 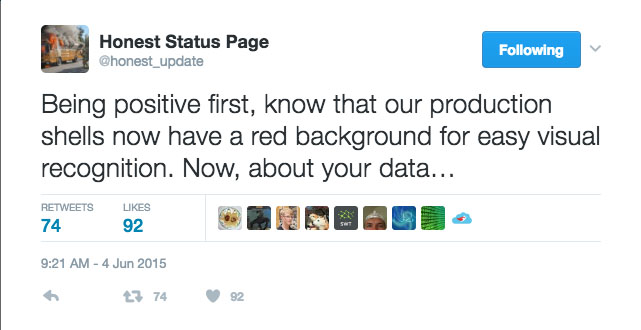 Before my current job, I’d been working mostly on a freelance basis on mostly front-end-ish projects. My work involved a lot of files, a lot of source control, and only local servers & databases. In my new role, closer to the metal of the production servers, I was living with the quiet haunting fear of mistaking a production terminal session for development or staging, and doing something absent-minded, with catastrophic results. I was careful, but I still worried.

Obviously, giving each server environment a clear visual cue in the form of a background colour was a great idea to implement BEFORE any disasters occured. I decided to set up an orange background for my staging environment, and a red one for production. It turned out to be straightforward & I’ve been glad for it ever since.

Give different environments their own Terminal background colours

1) Create two new profiles in Terminal > Preferences > Profiles by clicking the + button at the bottom of the profile list. Give each one a name and a background colour. I chose “Production” and “Staging”. 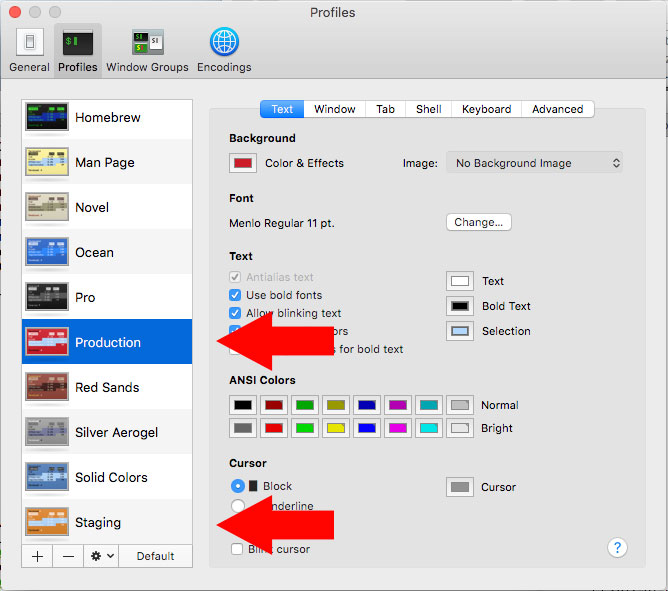 2) To use one of your new profiles right away, type tabc profile_name. tabc Production should now turn the background of the window red. tabc Staging should turn it orange. Typing just tabc will reset it to the default.

But you don’t want to have to do this manually each time you SSH into Production- a better idea is to set this up in an alias you will use to do your logins, so that it’s automatic.

3) Edit ~/.bash_profile to create aliases to set the terminal profile by name, run the usual SSH command for that server, and switch back to the default terminal profile when the session has ended:

4) Reload your bash_profile either by typing source ~/.bash_profile or by closing & reopening the Terminal tab.

I’m now a whole lot less worried about distracted terminal commands than I once was, because I have a strong visual cue of which environment I’m in.